As it turns out, the President and the Nuclear Regulatory Commission just approved their first nuclear power plant in 34 years’ time. This isn’t to say that other nuclear reactors haven’t been built in America after 1978; it’s just that 1978 was the last year that a new nuclear construction project was approved, and nuclear power plants take a considerable number of years to get up and running from planning through execution. But that’s all about to change. As of February 9th of this year, the U.S. Nuclear Regulatory Commission approved the licensing and construction of a pair of shiny, new nuclear reactors for Southern Co.’s Vogtle, GA site, just south of Atlanta. Apparently nuclear power hasn’t gone the way of the dinosaur or Cold War. Rather, its peaceful civilian applications continue to flourish.

It wasn’t so long ago (back in the early 80s) that Liftomatic helped in building a nuclear power plant in Zion, IL. Building a nuclear power plant is a little like the modern equivalent of building a cathedral, if only in the sense that the building process is painstaking and takes many years to complete. In this case, the energy company we were working for had gotten around to building one of the cooling towers for the plant. It was a fairly monumental job. They required 50-60 steel drums atop the tower to provide coolant for the new reactor, but they’d run into something of a dilemma: the cooling tower stood 70-80’ high in the air, far beyond the reach of even the energy company’s tallest vertical lifting cranes.

Prior to our work at Zion, we had always used forklift handlers to lift barrels up to where they needed to go. But seeing as this would be possible under the circumstances, we decided on a radical approach to solving the problem: we hired a Sikorsky transport helicopter to help us lift the drums atop the tower. Taking our customary Liftomatic material handling hooks and beaks, we attached them to the helicopter, and then attached the steel drums to the drum-handlers. The end result? Besides providing a lovely “Kodak moment”, with said Sikorsky sailing through the air en route to the tower’s pinnacle, our solution proved a success. All drum barrels were lifted into place on that day. By hook and by helicopter, Liftomatic ended up saving the day.

Prior to our work with the Zion facility, most of the common uses for Liftomatic equipment had been with forklift attachments but we had a new 4-drum crane-mounted attachment available.  After discussing the dilemma with the plant’s construction manager, he advised that they had a large Sikorsky helicopter available.  In no time, the pilot of the helicopter was “on board” with the plan and attaching the model L4CB below-hook attachment to his lifting gear on the helicopter.  The end result?  Besides providing a lovely “Kodak moment”, with said Sikorsky sailing through the air enroute to the tower’s pinnacle, our solution proved a success.  All of the drums were safely and efficiently lifted into place on that day.  By hook and by helicopter, Liftomatic equipment ended up saving the day. 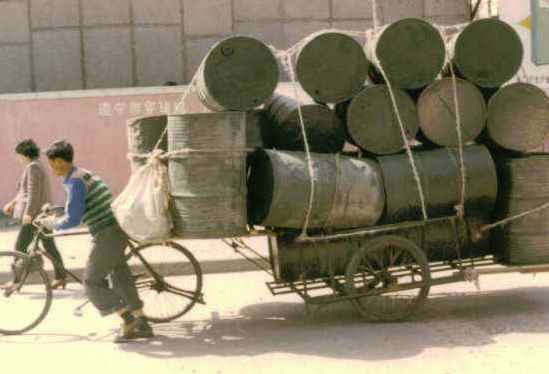