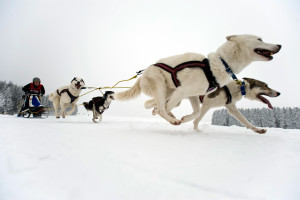 Are the right dogs on your team?

When it comes to business, knowing where to place key employees can mean the difference between a winning or losing team. For anyone not familiar with the Iditarod, it’s a race held annually in Alaska for mushers and their dog team which lasts a grueling 938 miles and takes place over 8-15 days. The mushers train their dogs throughout the year in an effort to organize a winning team, and they look for certain traits and physical abilities to match dogs up to different jobs on the team.

The lead dog is always the fastest and most intelligent of the bunch, much like a person you’d want to have leading your company or organization. This employee might also be a visionary as well.

Next come the swing dogs whose job it is to guide the team around curves and turns. In business, this person would be someone who is able to tackle the hard stuff or be good at figuring out how to adjust the process to better equip the company to deal with short term issues or problems. Behind the swing dogs are the typical worker bees; dogs in these positions are there to do the general work that doesn’t require any specific qualities or abilities, just a willingness to do as they are commanded and be good, solid workers.

Finally, the wheel dogs are those nearest the sled. They are the strongest and largest of the team and are able to use their muscles to pull the weight of the sled, which can be well over 100 pounds. This person in a company is typically recognized as someone who’s in the office early, and often stays late to make sure that all deadlines are met.

Mushers also have to be willing to adjust when conditions aren’t perfect, whether it be hazardous conditions or not enough snow. Being able to respond and adjust to unexpected changes can keep a company afloat during difficult times. For example, with oil prices being low, some sectors are declining. Liftomatic serves a wide variety of industries, so we are able to make up that cash loss in other sectors which are doing well. Flexibility is necessary when competing in the world of business, just like in the Iditarod.

When hiring or streamlining a company, making use of your best prospects for various jobs will help to create a winning team. It can take time to figure out who works best in what position, but through trial and error, it can lead to a winning combination.