Liftomatic has long believed that the Parrot-Beak® drum handling products will truly and dramatically improve a customer’s drum-handling abilities. Our sales team has it easy, because we’re selling a product that works time and again, and we have the repeat business to back it up. However, that old saying “if it looks too good to be true, it probably isn’t” has a way of making people wary when the pitch seems to be so positive. Fortunately, there’s a great way to overcome these reservations: the industry-leading Liftomatic trial policy.

Separate from our rental program, which allows customers to rent products on a weekly basis for short term drum handling needs, the trial program is free. This is only possible because we believe in our products – and know that once your team has had a chance to work with Liftomatic equipment for ten days without the pressure of a sales team’s presence, it will fit so naturally, and improve the way you move drums to such a great extent that you’ll never want to give it back – though of course, that option is there.

It’s always a proud moment when a prospect who has opted to take advantage of the trial program ends up buying the unit they’ve received and becomes a customer– it affirms our belief in Liftomatic products, and the validity of our claims to provide marked improvement for your drum handling operations. We know it’s not every company that can truly see such measurable results from their business, and consider ourselves fortunate that we have the regular opportunity to hear how well the products work for your organization.

So to those skeptics who tend to ascribe to the “too good to be true” mentality, we say, “once you try it, we bet you’ll want to buy it!” Be sure to contact us today to talk about how Liftomatic can help your business, and stay tuned for our upcoming blog series where we’ll dig deeper into the specifics of the ROI you’ll get with Liftomatic! 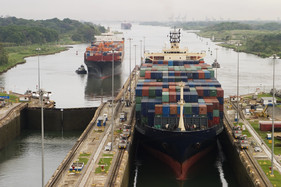 Planned by American engineers and built by Central American laborers at the start of the 20th Century, the 77.1 km Panama Canal ushered in a whole new era of opportunity for global trade. Suddenly, in one grand swoop, the world’s merchant marine didn’t need to round Cape Horn at the tip of South America in order to get from Atlantic to Pacific, and/or vice-versa. As a result, new ports and markets were accessible to the free market’s ups and downs in a way that was without precedent.

Efforts currently are underway to upgrade the Panama Canal to meet the standards of today’s merchant marine. In a referendum approved by 76.8% of Panamanian voters, the Republic of Panama adopted a resolution that would expand the Canal’s width and depth at several crucial points, thereby allowing it to accommodate the 37% of the world’s shipping that would else wise no longer be able to navigate its full course.

Being that we at Liftomatic are in the business of supply drum handling and lifting equipment to some of the world’s foremost ports and companies, and being that so much of today’s total steel drum barrel traffic comes in the form of oil barrels, we can’t ignore these developments – if simply on the behalf of our client base. The world is changing. Yesterday’s feats of engineering are beginning to look like flyweights in comparison with the engineering of tomorrow. Everyone who wants a seat at the table in determining the course of maritime trade for the next century should be paying attention to Panama.