1947 was a big year. Gregory Peck and Rosalind Russell won Golden Globes. The movie, “The Best Years of our Lives” was selected as Best Picture. The International Monetary Fund began operations. The largest group of sunspots ever recorded happened in ’47. Jackie Robinson became the first African American to play major league baseball. And explorer Thor Heyerdahl sailed his famed craft the “Kon-Tiki” from Peru to Polynesia. 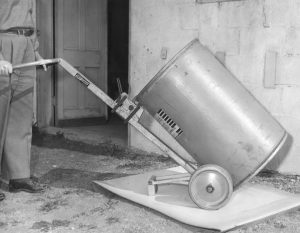 Also in 1947, two guys armed with an idea to improve productivity, safety and efficiency in drum handling technology, started Liftomatic Material Handling, Inc. The product of necessity, marketing and engineering acumen, these two gentlemen saw a need – and filled it. One a plant manager and engineer of Norwegian descent, the other a salesmen of mechanical office equipment who hailed from Sweden. Together, they built on a concept that included a two wheel hand-truck with a  positive grip mechanism (later to be named the “Parrot-Beak®”) which would hold a 55-gallon drum during transport and placement. The first 6 hand trucks were sold to the DuPont corporation in Chicago in the spring of 1947.

From those early developments to the advent and nationwide adoption of the forklift truck during the early stages of the Korean conflict, Liftomatic products kept pace with the times. Increasing popularity for unitized handling concepts, bulk transfer, cubic storage and warehousing efficiency saw the Liftomatic product line grow from 1 to over 20 products in just 10 years.

During the last 40 years, we’ve tried to stay true to the founders’ mission: Build safe, durable products with input from customers and always remember that “The quality is remembered long after the price is forgotten”. Today, the Parrot-Beak® line of products includes more than 40 models in 120 configurations.  Whether your operations require handling 1 drum per week or a thousand per day, there’s a Liftomatic model suited to your requirements.

We look forward to bringing you some additional history of Liftomatic products as we go through this 70th anniversary year.  We also look forward to serving your operations for the next 70. As always, we thank you for your trust in Liftomatic.