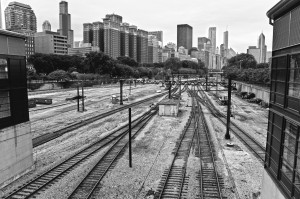 Here’s a neat fact for you: 90% of America’s population lives within a few hours’ drive of an ocean or a Great Lake. That’s not just a random coincidence, or simply a preference on the part of Americans for nice, strong sea-breezes. It has everything to do with economics. The United States was originally founded along the fastest-moving trade routes available at the time: namely, the seaport harbors, river-ports, and lakeside cities where goods could be transported and delivered to market with relative quickness. There’s a historical reason why the vast majority of immigrants to this country arrived by way of New York City: it simply has one of the finest natural harbors on Earth. Likewise, with the sudden and seismic growth of the transcontinental railroads of the mid-19th century, cities like our own beautiful Chicago came suddenly into their own as epicenters for freight and transport.

Here’s a lesson in city planning they may not have taught you in high school: generally speaking, a city is only as resilient as its ability to import, export, and warehouse freight and material goods. Thus in one sense, the materials handling industry is responsible for the economic well-being of the community that surrounds it. Next time you’re at dinner or the bar and you want a friend to help spot you part of the check, feel free to remind them that the material handling industry (i.e. you) is what keeps said restaurant and/or bar in booming business.

Now, think of some of the more recent developments in terms of material handling. Think about the hundreds of international cargo flights that transit each month between China and the United States, or between Europe and the Middle East. Think about how this collective phenomenon allows for overnight delivery of some of the most valuable goods and services that the world produces. The International Air Transport Association (IATA) estimates that a full $5 trillion in goods makes its way to market by way of airport. Now, consider how this level of instant access to valuables begins to shape not only an economy, but the demographics of a country. Simply put, the cities that invest in major airports – the ones that dare to make the effort at becoming “aerotropolises” – are the New York harbors and Chicago rail-yards of the 21st century.  While the heavy-duty import/export items are still delivered via port, the lighter – and frequently more valuable – products are delivered via plane.

What all material handlers need to grasp is the lesson that companies such as UPS, FedEx, and Amazon have long since learned: the increasing need to do quick turnaround business with airports. Proximity to major airport hubs, as well as increased automation and other time-saving strategies, will become ever increasingly important factors for the long-term profitability of the material handling industry. It’s a lesson that’s written clear in the sky, for all to see, in the contrail plumes of the UPS plane passing overhead…